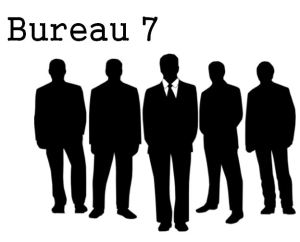 This is a old FATE Core setting I ran for my home group, and at a few conventions. It has a very specific comedic tone.

It’s a silly take on the whole MIB, Delta Green, secret-government-agency-investigating-the-occult style organization. The players are all agents of Bureau Seven, a secret U.S. government agency chartered to deal with supernatural threats..

The “joke” is that the agency is underfunded, disorganized mess. All of the characters are either useless or severely dysfunctional in some way.

Think of it as a more frivolous, less competent version of the Laundry.

There really isn’t much of a plot – making the scenario work relies on the players wanting to role-play the provided characters.

Here are the pregen character sheets, along with a character summary sheet for the GM: