I’ve been noticing a sub-genre of science fiction that’s been popping up in a couple of different RPGs recently. If it has an actual name, I’m unaware of it, so I’ve been calling it the CRT Future.

Essentially it’s sci-fi influenced by the the visual aesthetic of 1980’s science fiction movies, most importantly Alien & Aliens (See Appendix N Section below). It’s colder and bleaker than most “space opera” stuff, but not as baroque and dark as Warhammer-40K type games. It projects a gritty, lived-in future.

There’s a lot of technology, but it’s the clunkier 1980s version. Think giant, boxy CRTs with monochrome screens. Keyboards are loud, and spacecraft will have dot-matrix printers. Any computer graphics are crude wire-frame animations. Video signals will be grainy. Nobody has a smartphone.
Human settlements are more like modern-day oil rigs than sleek, white space stations. Imagine cramped dark corridors, with industrial lighting and exposed tubes and pipes everywhere.

There are some ideas that crop a lot in the source material.
Uncaring Corporate Behemoth: Weyland-Yutani is the stereotypical example.  Con-Amalgamate from Outland works as well. Whatever it’s called, the company is huge, faceless, and absolutely ruthless. In deep space, outside of the watchful eye of any authorities, they’ll try to get away with anything they can in order to make profit.

Working Class Heroes: The protagonists of the source material tend to be low-level corporate or government workers. In addition to the dangers of space, they need to deal with the indifference and outright treachery of their corporate masters.

Bleak Environments: The players will rarely be in lush, green environments – rather, they’ll be stuck on lifeless moons, derelict spacecraft, and planets with unbreathable atmospheres. 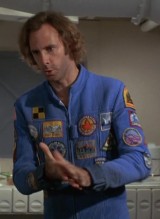 Patches, so many patches: Presumably inspired by military/NASA, people in the CRT future will wear coveralls covered in patches. These will be work clothes, so they’ll usually be faded and worn. The patches will presumably be of previous employers, or personal interests.

Unknowable Alien Horrors: The universe is cold and hostile, and any alien life you meet will be the same. If you’re lucky, they only want to kill you.

The new game Mothership by Tuesday Night Games is a simple, 40-page RPG. It’s a simple percentile system, where you’ll be rolling low vs your stats and save numbers.
Players can play Teamsters, Androids, Scientists, or Marines. The tone of the game leans heavily towards horror. There are rules for keeping track of the mounting stress levels of the players, and “panic checks” when something horrible happens.
The stand-out thing about Mothership is the physical design of the book. Everything is laid out simply and clearly, and finding the rules you’re looking for is easy.
Even the character sheet is well-designed, with all of the rules needed to create a character on the sheet.
There’s even a random table to choose what patch appears on a character’s coveralls.
There’s also an excellent scenario book for Mothership called Dead Planet. I’ve run a bit of this, and the system works really well.
Hostile 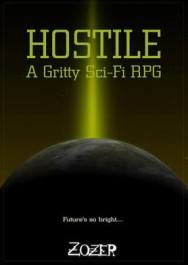 There’s a a hack of Traveller\Cepheus Engine called Hostile. It’s a big 307-page book full of careers (Roughneck, Corporate Agent, Spacer). You’ll need a copy of the Cepheus Engine or Traveller to use this . It’s full of information about ships, and installations.
This is a much more traditional game than Mothership,
I’ve just started looking a Traveller stuff again, so I haven’t had a chance to play this one yet.

This one isn’t really retro-SF, because it was released in 1993 by TSR, when the CRT future was still kind of new. Bughunters was a world book for their ill-fated Amazing Engine universal system. Players play vat-grown clone soldiers of the Unified Terra Reconnaissance and Peacekeeping Force (UTRPF) who travel around hunting dangerous alien animals. I’ve never played this one, but I’ve always been impressed with the quality of the Amazine Engine worldbooks, so I’ll probably give this one a try eventually.

Wizards of the Coast recently re-released Bughunters in PDF and POD forms.

If 1991 Leading Edge Games put out a licensed game based on the movie. I’ve never looked at this one (it’s out-of-print), but it’s apparently based on Phoenix Command, a combat system I’ve talked about previously.

CRT Future is primarily a visual aesthetic, so I’m mostly going to list movies here.
Obvious References You’ve Probably Seen:
These are the movies that are probably the main influence on this sub-genre
Obscure stuff:
Creature (1985): This is one of a vast number of B-movie Alien rip-offs. It’s not particularly good, but it has a few things that are worth lifting for a game. Klaus Kinski as a crazy stranded scientist, Diane Salinger (Simone from Pee Wee’s Big Adventure) as a gun-toting security officer, and the idea of the threat coming from a buried alien menagerie.
Dark Star (1974): An odd, early seventies comedy about a crew of overworked burnouts aboard a crumbling starship tasked with destroying rogue planets. This was John Carpenter’s first movie, and was co-written with Dan O’Bannon (the writer of Alien). It’s basically a upgraded student film, but captures the boredom and tedium of space travel, and how ordinary people might react to it.

One thought on “The CRT Future: Retro-80’s Sci-Fi”