A class for The Black Hack – Second Edition 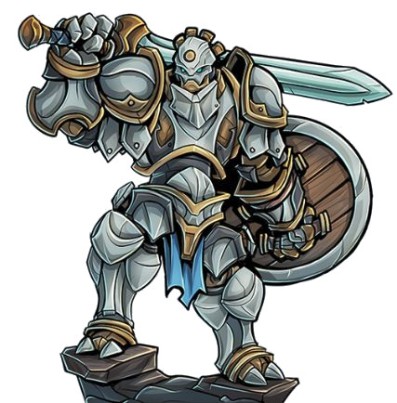 An artifact of the ancient world, Valor-Mechs are hulking clockwork automatons in the shape of a man. No living wizard or artificer can build one, but ancient models are sometimes dug up in ruins and reactivated. They will have no memory of their former lives, and can be taught any beliefs, or skills, as any other creature. They are often used by their discoverers as soldiers or guardians.

Starting Equipment: All Valor-Mechs will start out with a Oil can (Ud8)

Valor-Mechs need to regularly oil their joints. If they miss a day, their gears will start to creak. Roll with disadvantage for all stealth\sneaking rolls. For every week they miss, they will lose one point of DEX – permanently.

Mechanical Man: Valor-Mechs start off with +2 to STR, +1 to CON due to their size. Their appearance and strange buzzing mechanical voices give it -2 to CHA.
They are Immune to Poison or any biological-based attacks.
Rolls with disadvantage to electrical attacks

Armor-Clad: Valor-Mechs naturally have armour of AV 4. Their armour plating cannot be self-repaired in the field. After a combat, the Player does not roll to repair Broken Armour Dice. It can only be repaired by a professional smith, usually in a town or other settlement.

The Beautiful and the Sublime: Due to their size and strength, most scholars generally assume that Valor-Mechs were designed for war. The scholars are mistaken.
Valor-Mech were originally designed for creating and reciting poetry in the courts of ancient emperors.
Whenever a Valor-Mech sees a vista of beauty, natural or otherwise, it must make an INT roll to avoid drifting off into poetic fantasy for 1d6 rounds. During this fantasy, the Character cannot Move or take any Actions.

Gaining a New Level: Acquire and share a number of Experiences equal to your current HD to advance a Level.

When you gain a Level:

Note: The image is from the Patreon artist Printable Heroes, who makes excellent paper miniatures for role-playing games.

One thought on “Clockwork Poet Warriors”