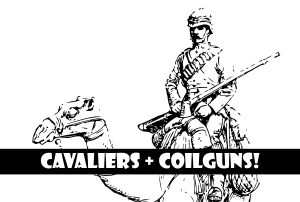 It’s a hack of the game Tunnel Goons by Nate Treme.

You can pick it up cheaply at itch.io for a few dollars.

It doesn’t have an actual explicit setting, but it does have an implied setting – a swashbuckling pulp science-fantasy world – something like Barsoom perhaps.

I recently ran a quick one-shot of C&C, and I threw together a quick setting and adventure. I’ve also created a fillable version of the original character sheet that comes with the game.

The planet is vast, much larger than Earth, with a double sun and a triple moon.

The Landfall Empires
Generations ago, humans were marooned on this world when their sky-ships fell to the surface of Amethyst. Humans gradually lost most of their technology over the years. They established many small city-states across the planet. They have a wide variety of cultures & governments. Some are peace-loving, some warlike. Collectively, they are known as the Landfall Empires.

Many of the city-states are defended by the Cavaliers, fighting men and women, with a strong code of honor. Essentially they’re the knights\samurai of this setting.

Magships
Amethyst has incredibly strong magnetic fields. Humans have learned to use massive lodestones to build flying wooden vessels to travel long distances. They are used by both wily merchants and warlords.

The Adventure – The Lost Ameranth

The players, led by Professor Pretorious of the University of Nova Babylonia are seeking the Lost Ameranth, an ancient flower reputed to offer immortality to those who ingest it. Through intense study of an ancient tome (The Antedecidi Manuscripts), he believes the Ameranth is somewhere in the Jagger Mountains. He has commissioned the magship Helios to take him and his companions to the distant mountain range and recover the fabled plant.

The Bad Guys
Unknown to our heroes, the villainous Lord Terus of the tyrannical city of Stygius is also aware of the Ameranth and has gained the assistance of a disgraced scientist to find its location. He and his troopers have found the secret valley in which the Ameranth exists. They have conquered the village of primitive humans that live around the cave of the Ameranth, and have been sending men into the cave to try and retrieve the Ameranth. None have returned.

The Secret of the Ameranth
The Ameranth is, in fact, a incredibly dangerous mutant tree. It was aboard one of the ancient human sky-ships as a biological sample. When the original ship crashed into Amethyst, it took root. The Ameranth can actually grant immortality, but of a terrible kind. Using it’s vines, It ensnares it’s victims and takes control of their nervous systems, turning them into puppets that it uses to collect fertilizer and water to nourish the tree. The mindless puppets have no will of their own, and do not age. Their only release is death.

The Crash
The Helios will encounter a magstorm over the Jagger Mountains, which will force the ship to crash-land on the razor-sharp peaks of the mountains. Players will need make an Easy (8) roll to avoid taking damage in the crash.

Captain Perecost will inform the players they’ll need a few days to repair the ship. The players will be free to explore the area.

The Body on the Trail
There is a trail leading deeper into the mountains. A body of a human will be found sprawled across the path. He is dressed is ragged animal skins, and has a tattoo of a plant surrounded by runes on his back. The tattoo is slightly marred by several bullet wounds. With the appropriate rolls they can find out the following:
Easy (6) – The flower on the corpses’s back matches the known images of the Ameranth
Moderate (10) – The Runes are in an ancient human language (English) translated as “Live Forever, If you Dare”
Easy (8) – The wounds were from a coilgun, and were inflicted only hours ago.
Moderate (10) – The man lived after he was shot and traveled from further down the path before he died.

The Village in the Valley
The trail will lead to a narrow hidden valley on the mountain top, which will weave through the imposing mountain peaks before opening up into a wide canyon, filled with vegetation and a small clear lake. On the shores of the lake, is a small primitive village.

It is currently occupied by Lord Terus and his troopers (3 for every PC). Professor Jeremiah Golthorn is here, serving as his advisor. He will certainly recognize Professor Pretorious, as they attended school together.

The villagers are being forced to serve Tereus and his men. They have been bullied into submission, but could be inspired to rebel with the right leadership – Hard (12)

The Cave
The cave is actually the ruins of a ancient sky-ship, buried in the side of the mountain. The cave is a jagged hole, with ancient runes (English) carved around it. With a Moderate (10) roll they can be translated as “Biohazard – Do Not Enter”

Inside there is a long metal staircase leading down into darkness. At the bottom is a large metal planter containing the Ameranth. Surrounding it are approximately 50 Puppets of Ameranth (humans enslaved by the plant) connected to the Ameranth’s trunk by long tough vines. They will immediately advance and attack. If the Ameranth itself is attacked, they will shamble toward the cave entrance and out into the village, attacking everyone in sight. Their vines can extend far enough to reach anywhere in the village.

Here’s a PDF of some pregenerated characters that would work in this scenario: Cavaliers_and_Coilguns_Amethyst_Pregens

Lord Terus of Stygius
Menace 14 Expertise 10 Clout 12
Special: Complicated Ancient Clockwork Armor. Terus’ Expertise must be reduced to 0 before his Menace may be engaged, and is only defeated when his Menace reaches 0.

The Ameranth
Menace 15 Expertise 15 Clout n/a
A large purple tree, approx 40′ high. It can attack multiple targets with it’s vines. If it defeats a target, it doesn’t kill it, it burrows its tendrils into the victim’s nervous system to create a new Puppet of the Ameranth.

The puppets are all dressed in the garb of the original victims – some in Stygian uniforms, native skins, or the silver tunics of the ancient astronauts.

If the Ameranth is killed, the puppets die immediately.