Skip to content
I’ve always been a a big fan of Edgar Rice Burroughs’ Barsoom novels, set on his dying, fanatstic version of Mars. There has been a good number of role-playing games set on Barsoom. Here’s the list I’ve put together so far.
Let me know if I’ve missed anything in comments. 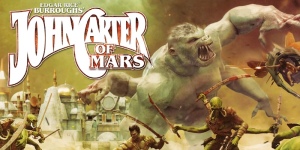 This is the big one. John Carter of Mars – Modiphius’ lavishly illustrated RPG, with the official backing of Edgar Rice Burroughs estate. It uses the same 2d20 system that their other games use (Conan, Star Trek). They’ve published multiple supplements, miniatures, tile sets, and a GM screen.
Even if you’re using another system, anyone interested in gaming on Barsoom needs to pick this up. There’s a lot of background material for running a game on Barsoom, in a clear usable format.
https://www.modiphius.com/john-carter.html

Warriors of Mars: The Warfare of Barsoom in Miniature 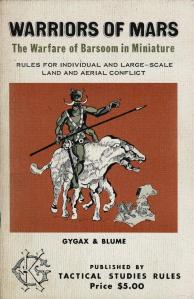 In 1974, Gary Gygax and Brian Blume put out wargaming rules for Barsoom, including individual man-to-man combat. You can get it for free at the Internet Archive.
https://archive.org/details/WarriorsOfMarsTheWarfareOfBarsoomInMiniature1974

Skirmisher Publishing put out an OGL version of Barsoom that should

work with most D20 systems.
https://www.drivethrurpg.com/product/51403/Edgar-Rice-Burroughs-Mars-Shadows-of-a-Dying-World-An-OGL-Guide-to-Monsters-Races-and-Beasts

Jeffrey Kazmierski put together a version of Barsoom for the FUDGE system. It’s no longer online, but you can still see it on the Internet Archive
https://web.archive.org/web/20031206065905/http://www.scarlet-tower.com/heroes-of-mars/barsoom.html

A Dream of Mars

Little Red Goblin Games has a cheap ($1.00) adaptation of Barsoom for Pathfinder
https://www.drivethrurpg.com/product/132419/A-Dream-of-Mars

Ray Otus made a simple hack of Tunnel Goons set on Barsoom. It’s only a few pages long, but includes rules for mass battles and airship conflict. I made a character sheet for it here
https://rayotus.itch.io/lords-of-mars
In addition to games set explicitly on Burrough’s Mars, there are many games set on fictional versions of Mars that are clearly inspired by Barsoom.

Warriors of the Red Planet

Night Owl Workshop puts out several games using Original D&D-style rules for variety of genres, including Warriors of the Red Planet. It’s set on a thinly-disguised Barsoom. It has rules for airship combat, underground exploration, and sorcery. It has a particularly nice “Appendix N” section, listing almost every Sword & Planet novel ever published, including a lot of obscure stuff more casual fans probably haven’t heard of.
https://www.nightowlworkshop.com/p/reviews-warriors-of-red-planet-is.html

Exile Games had an expansion to their Hollow Earth Expedition set on their pulpy version of Mars, using their Ubiquity system.
https://www.drivethrurpg.com/product/150488/Revelations-of-Mars 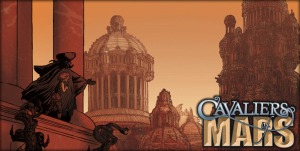 Adamant Entertainment put out two versions of this. One is a D20 version, the other is in Savage Worlds.
https://www.drivethrurpg.com/browse/pub/92/Adamant-Entertainment/subcategory/272_4256/MARS

This Victorians-in-space game features a very Barsoom-like Mars. There have been a few different versions:
The original GDW game
https://www.drivethrurpg.com/product/59092/Space-1889
The Savage Worlds edition – Red Sands
http://www.peginc.com/product-category/space1889/
And the Modiphius version using their Ubiquity system
https://www.modiphius.net/collections/space-1889

***UPDATE – Almost forgot, the original D&D, specifically Book 3 – The Underworld & Wilderness Adventures does include an encounter table for Mars, for both animal and human encounters 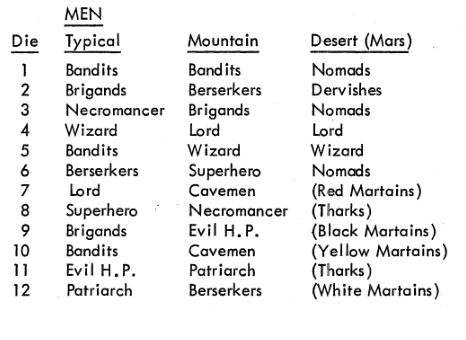 I’ve gotten a bunch of suggestions from Reddit and elsewhere. Thanks to everyone for the suggestions

This one looks out of print as far as I can tell. I think it’s a supplement for John Harper’s Danger Patrol
https://www.nobleknight.com/P/2147759277/Thought-Lords-of-Mars
Suggested by omnihedrom from reddit/rpg

A supplement for Dungeon World that helps to create a Sword & Planet like world. Easily adaptable to Barsoom
https://redboxvancouver.wordpress.com/dungeon-world-stuff/
Suggested by J_Standberg on Reddit/rpg

An OSR game for Sword & Planet
https://www.drivethrurpg.com/product/254446/Jarkoon–Adventures-on-Planet-X
Suggested by Simon W at gamingtavern.eu

A Searchers of the Unknown hack available for free at
https://retroroleplaying.com/content/searchers-unknown-rpg-collection/
Suggested by RedwoodRhiadra at reddit/rpg

Under the Moons of Zoon

This is its own light RPG system, with a strong Burroughs influence on the world.
https://www.drivethrurpg.com/product/119991/Under-the-Moons-of-Zoon
Suggested by RedwoodRhiadra at reddit/rpg

The Pathfinder supplement Distant Worlds lists some of the other planets in the Pathfinder universe. One is Akiton, clearly a take on Barsoom.
https://pathfinderwiki.com/wiki/Akiton
https://paizo.com/products/btpy8qib?Pathfinder-Campaign-Setting-Distant-Worlds
Suggested by high-tech-low-life on Reddit/rpg

Found this one. It’s a free add-on to the man-to-man tactical game Swordplay. It’s more of a wargame than a RPG, but it’s close enough. 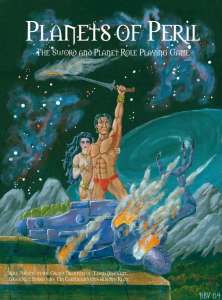 This is Keith Vaughn’s sword & planet adventure game – much of it is Barsoom-inspired.

Suggested by the author in the comments below. 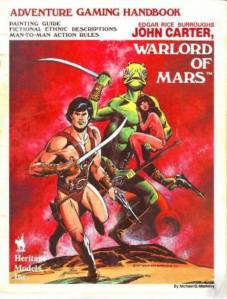 A RPG put out by Heritage Models, Inc. in 1978. It’s currently out-of-print, and I don’t believe there’s a PDF available anywhere.

This is an OSR game by Jason “Flynn” Kemp designed for general Sword & Planet adventures, but the core rules are designed around Barsoom.

You can get a free rough draft version at https://flynnwd.blogspot.com/2012/03/fantasy-friday-sword-planet-rpg-first.html

Not a full game, but an interesting article in the August 1975 edition of the Strategic Review, the gaming fanzine TSR put out before Dragon magazine. Its called the Deserted Cities of Mars by Jim Ward. It’s got a description of the ancient cities of Barsoom, along with some generation tables.

Knight Owl Publishing recently put out Pulp Triumphant, a pulp adventure RPG. It has several settings, including one called Red Planet. It’s clearly Barsoom, even using the same names for cultures and creatures.

Bad Barsoom: A setting for Troika!

Here’s one I actually created – Bad Barsoom. It’s a short setting for the Troika! role playing game. It’s set on Barsoom in a future age, after the death of John Carter and Dejah Thoris. It’s not entirely serious – Cathoris XI is the corrupt Jeddak-For-Life, propped up by Jarsoomian military advisors. Tharks have become gangsters. Most Red Martian princesses and princes are social media influencers who fake their own kidnappings for sport. It’s a PWYW booklet in the PocketMod format. I’m thinking of expanding on the world into a full Troika! supplement.

9 thoughts on “Gaming on Mars: a (mostly) complete list of Barsoomian role-playing games”