I’ve been playing around with Casket Land, the gothic supernatural western game from Marie Enger.

It’s set in a dying southwestern town surrounded by vast rows of caskets and horrible monsters. It uses the Powered by the Apocalypse system.

The desert sands turns to a vast field of ash. It is an undifferentiated field of grey, with the occasional cairn of bones.
While the players cross the field, the wind will pick up and cause a blinding storm of ash and bones. Players must make a Survive or Shield roll to avoid taking 2 harm.

The Town of Unity 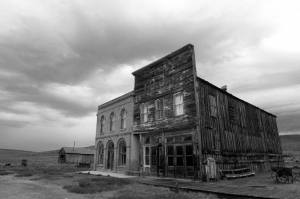 This town looks like it was once prosperous. The buildings are ornate, though they are now grey and crumbling.
The wells of Unity dried up years ago. The town once had a population of hundreds, but now only 30 townspeople remain.
A madman called the Tinkerer brought a machine he calls the Waterforge as a gift to the town. It can extract all the water from a human body, and leave only dust behind.
The townspeople have a weekly lottery. The winner is forced into the Waterforge to provide water for the rest to survive. Today is the day of the lottery.

Copse of the Hanged Men

Ringed around a dry spring, is a small copse of dead trees. Hanging from the twisted, desiccated branches are dozens of bodies on nooses. One of the hanged men is still alive. If rescued, he will croak out a cryptic message before he dies.

Pilgrims of the Dry Messiah

Brother Korah leads a band of a dozen ragged refugees. They are are on a pilgrimage to find something Korah calls the Dry Messiah, who will answer their prayers and quench their thirst. They’ve been losing members to thirst and exposure. If allowed to continue, they are most certainly doomed.

From a great distance, this appears to be a dead forest. When approached, it reveals it self to be a vast collection of wooden gallows. They are of a wide variety of styles and materials. There are no bodies hanging from any of the nooses, as they have all been devoured by the Gallow Hounds that haunt this place.

Mutant hounds that have evolved to only feed on human bone marrow.
Vitality 4

Law of the Pack

Will travel and attack in packs of three.

Can release an unearthly howl that can freeze its prey in fear. Victims can roll Survive to avoid being frozen.

Once they kill a creature, the entire pack will all break off any other attacks and feast on the dead victim.