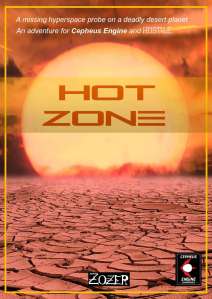 I’ve just run a one shot of Hot Zone – Zozer Games’ adventure for Traveller/Cepheus Engine. It’s set in their retro ’80s Hostile universe. It’s a lot of fun, and it’s inexpensive. I’d highly recommend it. For my game, I generated a number of handouts for the players, and a few tools for the GM as well. I’m sharing them here, for anyone else who might run this.

SPOILERS – Don’t read this post if you plan on playing this adventure.

The adventure concerns a commercial starship crew assigned to land on a distant desert world to recover data from a wrecked probe. The major dangers are mostly environmental, from the scorching desert to the dangerous wildlife.

I’ve made a set of pregenerated characters. I kept the descriptions sparse, so the players could flesh them out on their own. I used the Hostile character sheet of my own design.

Part of the fun of the scenario is the players having to decide what they’ll be bringing with them in their trek across the desert. The book makes it clear they don’t have any vehicles, so they’ll have to carefully calculate how much they can afford to carry with them. To save time, I wrote up a ship’s locker inventory, with extra pages describing each item. All of the items in the locker can be found in Zozer Games’ free Hostile Toolkits supplement, or in the free Hostile Weapons Guide (PDF link to Zozer’s site). I deliberately limited the number of canteens to keep things interesting.

For the GM I made two sheets. A lot of the adventure is the players deciding where they’ll marching to across the desert. I’ve made a map and chart that show all of the distances between points of interest, so the GM will know how long the players will be traveling.

Secondly, I’ve made a combat sheet for the Walkers, the alien crabs that menace the players. They have check boxes to make it easier to keep track of their stats.