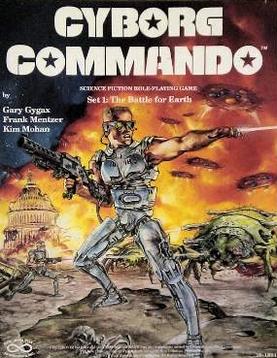 Cyborg Commando was a RPG published in 1987 by the now-defunct game company New Infinities Productions.

The setting background was that in 2035, the Earth was invaded by a alien race called the Xenoborgs (described as looking like giant dust-mites). Earth’s only hope are the Cyborg Commandos – technologically enhanced humans, bristling with weapons and gadgets.

It was created by the legendary game designers Gary Gygax, Frank Mentzer, and Kim Mohan.

The game was a critical and commercial disaster, and the company folded two years later.

The basic concept of the game (Cyborgs vs. Aliens) seemed like it could have been a fun pulpy action-adventure RPG, but the game itself was a poorly organized mess, and the rules were odd and a bit too complicated.

Here’s an old RPG.NET review that covers most of the important details.

Here’s a more comedic take on the game.

Here are some images of the game. 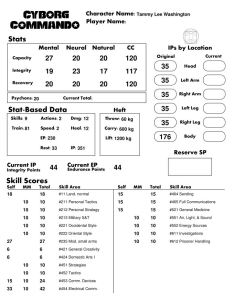 I wouldn’t really recommend playing this, but if you do, here’s a fillable two-page PDF character sheet I’ve created for it.