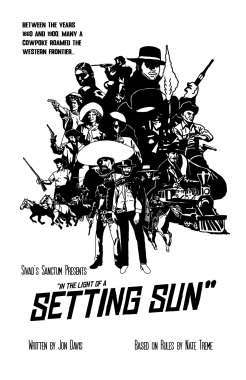 I’ve been playing around with Into the Light of a Setting Sun, an Old West RPG from John Davis. It’s for sale on itch.io.

It’s a hack of Nate Treme’s  In the Light of a Ghost Star game.

The rules are quite simple. There are three stats – Iron, Reflexes, and Wits, each determined by a 3d6 roll.

All checks are made by rolling below a stat on a 3d6.

It also has a Renown die, which works like a Black Hack usage die. It represents the players fame. It starts at D20 and degrades any time a 1 is rolled. It can trigger fights, settle outcomes, and is used when characters are dueling.

It comes with a PDF character sheet that I’ve modified to make fillable. You can also click on the portrait area to add an image